Cost of Doing Business by Country

The last blog looked at the Cost of Doing Business by State – which was a timely topic given Tesla’s announcement yesterday to relocate their corporate headquarters to lower-cost Austin, Texas from Silicon Valley.  Competition for where business locates, however, is not only state-to-state but also country-to-country.

Fortunately the source for the previous blog — tipalti approve, a provider of business and financial services, also included in their comparative cost study 31 economic developed countries.   They examined average annual wages, electricity costs, internet prices and top corporate income taxes and then calculated an overall affordability score for each country with data sources as follows:

Individual  metrics were assigned for a normalized score out of 10, and then averaged across the four data points yielding an overall affordability score.  Findings are detailed in the table.   The most affordable countries according to this methodology may surprise you as they did me —  Hungary, Lithuania, Czech Republic. Estonia and Poland.  Least affordable under this methodology among 33 countries are Germany then Australia, Denmark, United States and Switzerland. 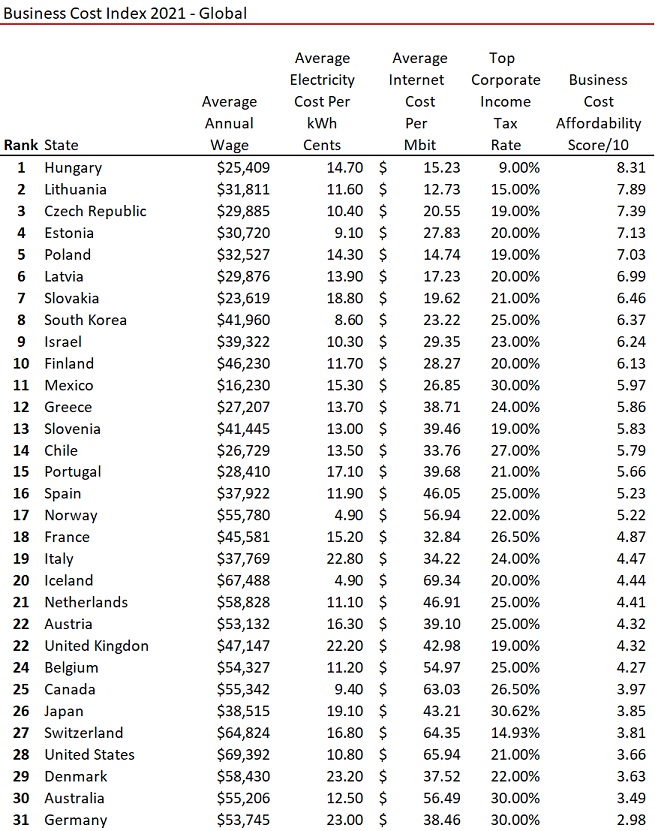 To read the entire study for OECD countries and states across the country click The Business Cost Index 2021 | Approve.com

Just as with the portion of the study on U.S. state-by-state cost of doing business, inclusion of other data factors and a change from equal weighting would alter these outcomes.   There are cost factors other than these four metrics that are appropriate to consider between countries such as shipping and logistics costs — which would also alter ranking outcomes.

A concern is that the U.S. is currently ranked 28th out of 31 countries – and that is before the proposed 26.5 percent corporate tax rate pending in D.C.    No doubt such an increase in corporate taxes would push the U.S. further down the list in business affordability.

Cost of doing business remains one of keys in business location global assuming ceteris paribus – all else equal.