Better Than Expected June 2022 Job Growth for the U.S. - But the Clouds of Inflation and Shrinking Consumer Confidence Continues 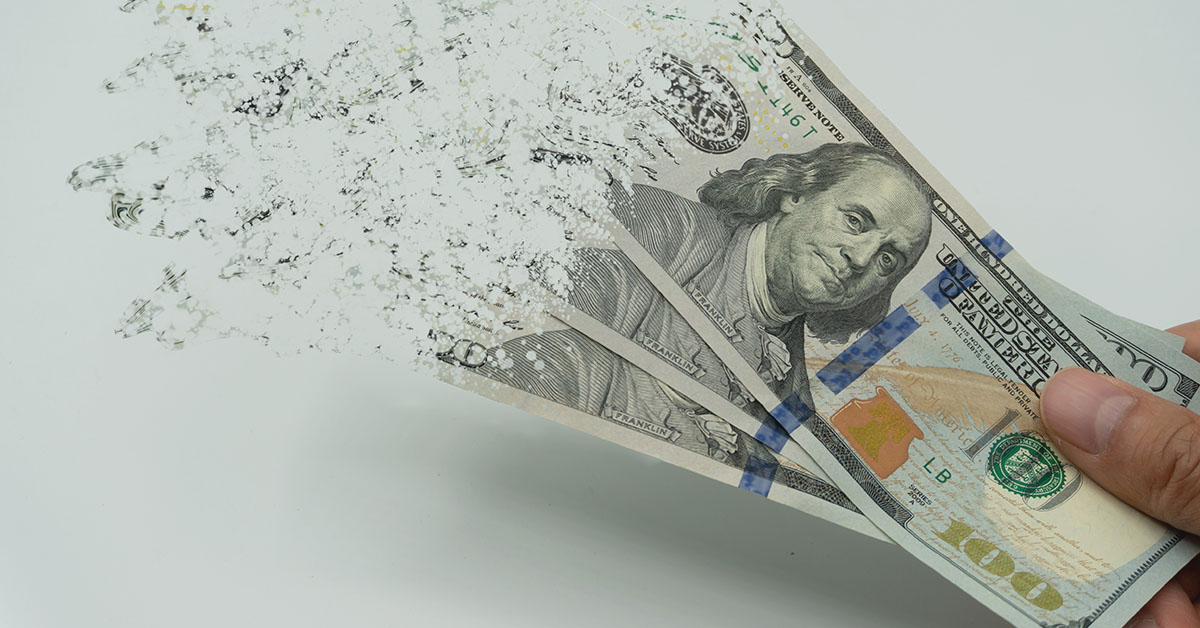 The U.S. unemployment rate remained at 3.6 percent, unchanged now for the past four months. The following table shows monthly change in jobs and the corresponding unemployment rate monthly since January 2020. In the past the Federal Reserve has deemed the U.S. fully employed when the unemployment rate was in the 5.0 percent to 5.5 percent range.

Total jobs are shown monthly in the graph commencing in 2007 – prior to the Great Recession ignited by the burst of the housing bubble. Note that from the job trough in 2010 to just before the pandemic the U.S. added 23+ million jobs – and almost all of those were lost in the first 60 days of the pandemic. 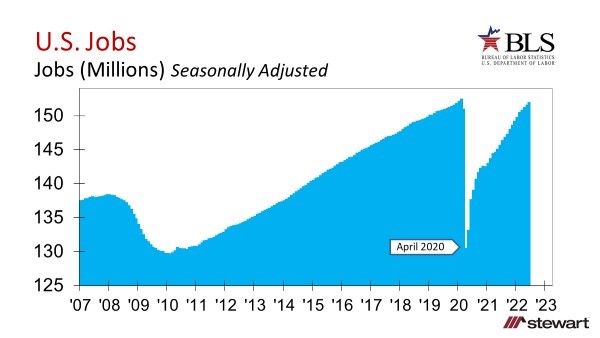 Not all job Sectors were impacted equally by the pandemic nor are they recovering similarly. The total percent of jobs by SuperSector are shown in the next table (as defined by the BLS) for June 2021 and June 2022. The third column shows the percentage of jobs lost from February 2020 to the trough that year. The second to last column details the percentage of jobs in June 2022 compared to February 2020 – the month prior to the pandemic. The second table shows employment across the SuperSectors for key select dates. Every SuperSector except Government showed a new gain in jobs from May to June 2022. 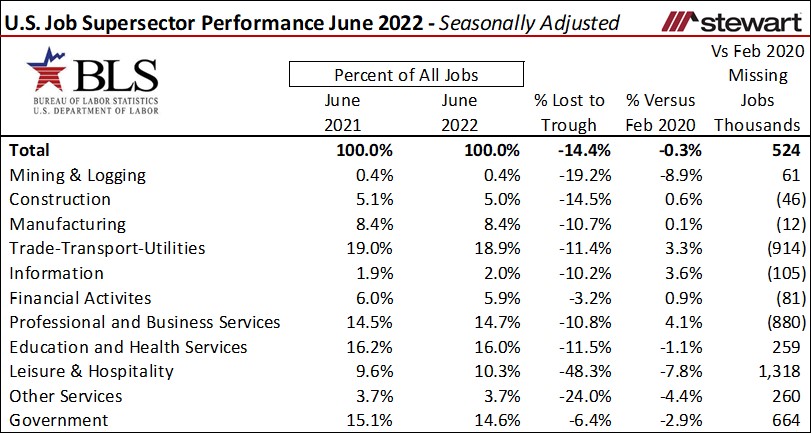 Hourly wage rates were up across all SuperSectors on a year-over-year basis as shown in the next table. The greatest gain in the past 12-months was Leisure & Hospitality, up 9.1 percent following an 8.1 percent gain from June 2020 to June 2021. Despite the gains, this Sector still remains the lowest paying of all. The Information SuperSector is the highest paying at $46.23 per hour.

Unemployment rates are detailed for Educational Attainment and Demographic Cohorts in the next table. Those with a Bachelor’s Degree had a miniscule unemployment rate of 2.1 percent compared to 5.8 percent among the group not attaining a High School Diploma. 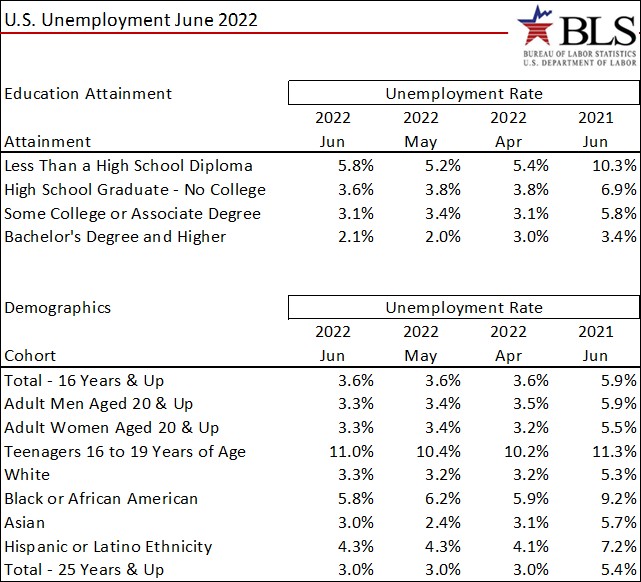 Unemployment rates across Occupations and by Industry & Worker Class are detailed in the next two tables. These data are only reported on an unadjusted basis (not-seasonally adjusted) and thus can only be compared year-over-year on an apples-to-apples basis. In the second table note that the Mining, Quarrying, and Oil & Gas Extraction group had the largest year-over-year decline in unemployment, plunging from 10.3 percent in June 2021 (the highest) to 1.6 percent in June 2022 (the lowest). West Texas Intermediate (WTI) Crude Oil Prices rose from an average $71.38 per gallon in June 2021 to $114.84 in June 2022. 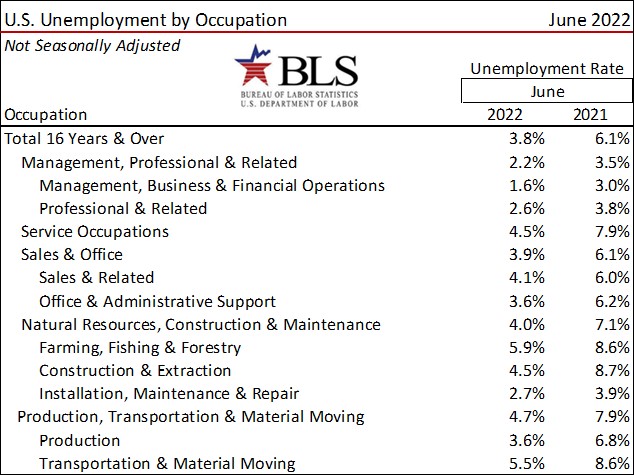 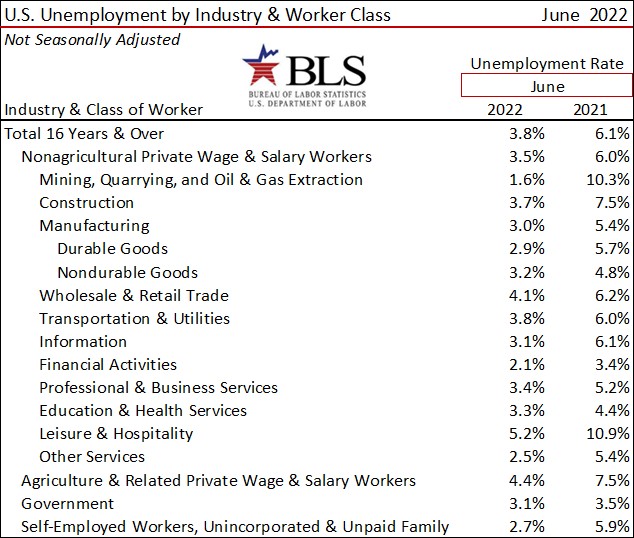 The hardest-hit SuperSector at the onset of the pandemic was Leisure and Hospitality. After losing one-half of all jobs in March and April 2020, the Sector has come back, but still not to the 2019 level, short 1.318 million positions. Until just two months ago, consensus was total recovery in this Sector was years in the future. CBRE’s June 2022 forecast for U.S. hotels, however, now calls for Revenue Per Available Room (RevPAR) to get back to the 2019 $184 daily average by December this year. 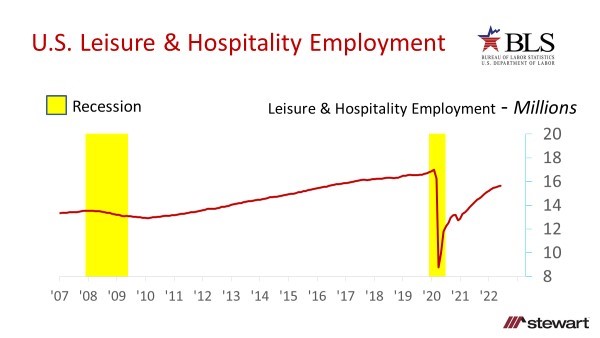 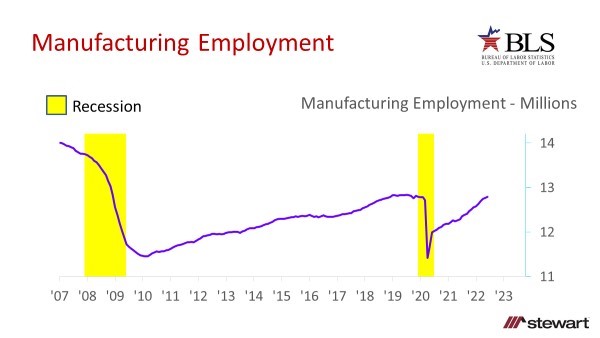 All-up, the June 2022 jobs report from the BLS was very strong. Focus, though, must be kept on inflation and shrinking consumer confidence. The Conference Board’s Consumer Confidence Index® decreased for the second month in a row to the lowest level since February 2021. The Conference Board’s Expectations Index -- a look forward based on consumers’ short-term outlook for income, business, and labor market conditions -- plunged to lowest level since March 2013, raising concerns that a recession and job losses are on the horizon.