U.S. Census Estimated Population Change 2021 to 2022 and Why - by State and The District of Columbia 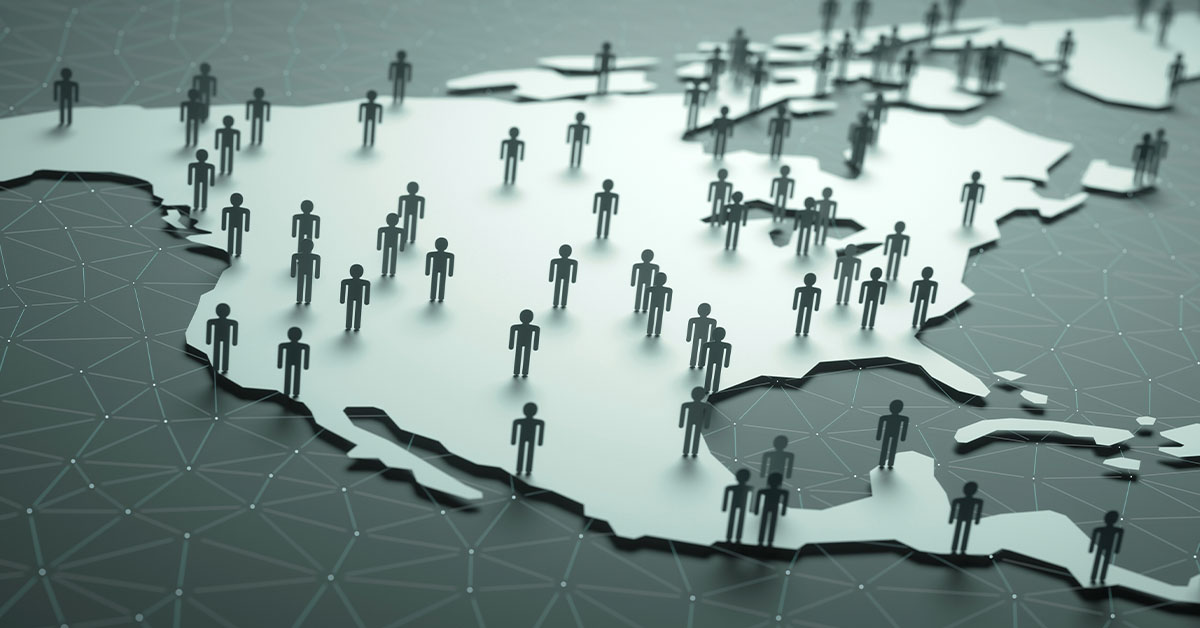 After sinking to the lowest percentage population growth in 2021 since the U.S. became a nation in 1776 (growing a miniscule 0.1 percent), it rose by four times that amount in 2022 to 0.4 percent according to estimates from the U.S. Census Bureau. Population gain alone does not guaranty economic growth. Changes from one-year to the next in general show where people are departing and where they (and their jobs - typically) are landing. Work From Home (WFH) and Work From Anywhere (WFA) have changed that, however.

Fortunately, the U.S. remains among the very few economically developed countries that continues to enjoy population growth. From July 1, 2021 to July 1, 2022 U.S. population grew from 332,013,554 people to an estimated 333,287,557 according to the Vintage population estimates by the U.S. Census Bureau – a gain of 1.256 million people. These data obviously do not include undocumented migrants crossing the Southern border.

The 2020 Census serves as a foundation for 2022 Vintage population estimates which then incorporates data from births, deaths, and both domestic and international migration. Just as with job growth from one state to another, population change varies across the country. The first table shows the 50-states and the District of Columbia sorted by the greatest percentage growth in population 2021 to 2022. Florida was the top-growth state population percentage wise at 1.9 percent – five times that of the U.S. overall. The next four places included: Idaho +1.8 percent, South Carolina +1.7 percent, Texas +1.6% with South Dakota and Montana tied at 1.5%. Largest declines were New York -0.9%, Illinois and Louisiana -0.8%, West Virginia -0.6 percent and Hawaii -0.5%.

States are ranked by the net change in population numbers from 2021 to 2022 in the next table. Texas, posted the largest one-year net gain in population (up 470,708) which numerically covered the population losses of New York, California, Illinois, Pennsylvania and Louisiana combined (with a total decline of 475,335 in 2022). Even though Texas made up just 9.0 percent of the total U.S. population in 2022, the Lone Star State accounted for 37.5 percent of the net population gain nationwide. Five states made up 98+ percent of the net U.S. population gain in 2022: Texas, Florida, North Carolina, Georgia and Arizona. Two states essentially had zero change in population in 2022 – Vermont and Alaska – while 17 states showed a loss. New York took the honors of not only losing the most people but also having the largest percentage population decline in 2022. 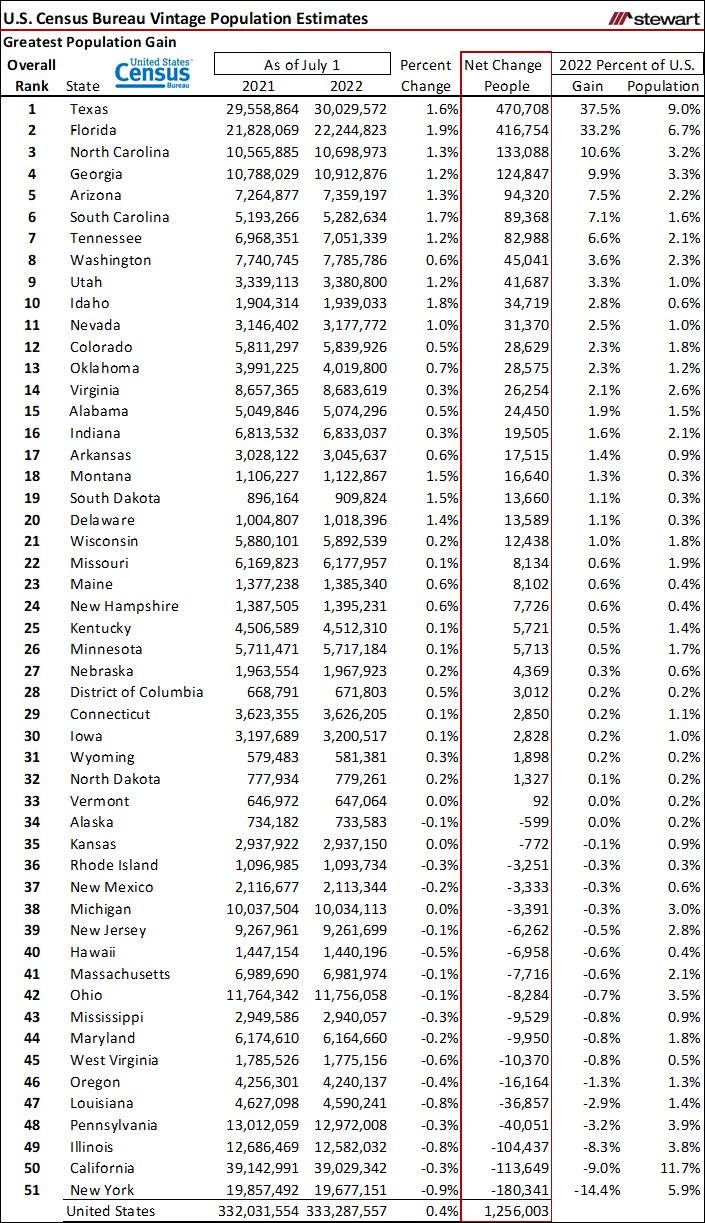 Population growth (or decline) is a function of net natural increase (births minus deaths) and migration (both international and state-to-state). The next table shows natural population change calculated by subtracting deaths from births. Almost one-half of the states (24) posted a shrinking natural population in 2022. Even though New York posted the largest total population decline in 2022, down 180,341 people, the natural population increased by 35,611. Florida had 40,216 more deaths than births, but thanks to migration came in with a net increase of 416,754 more people. 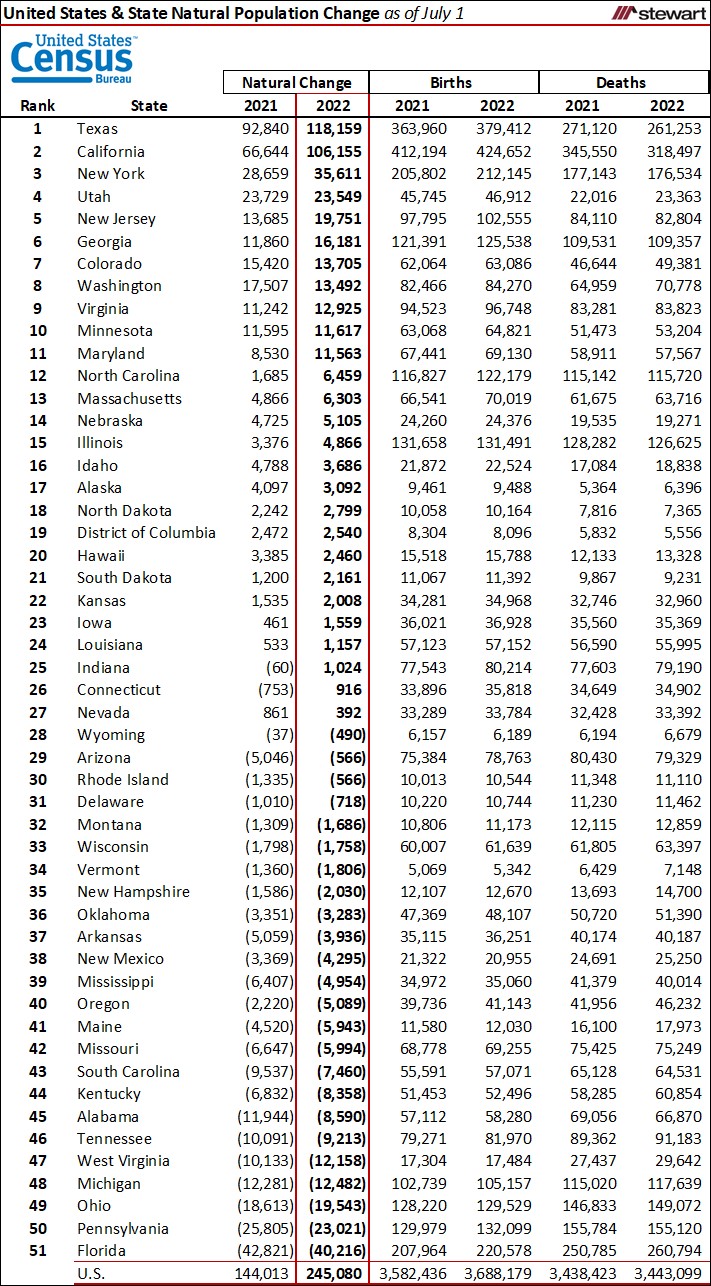 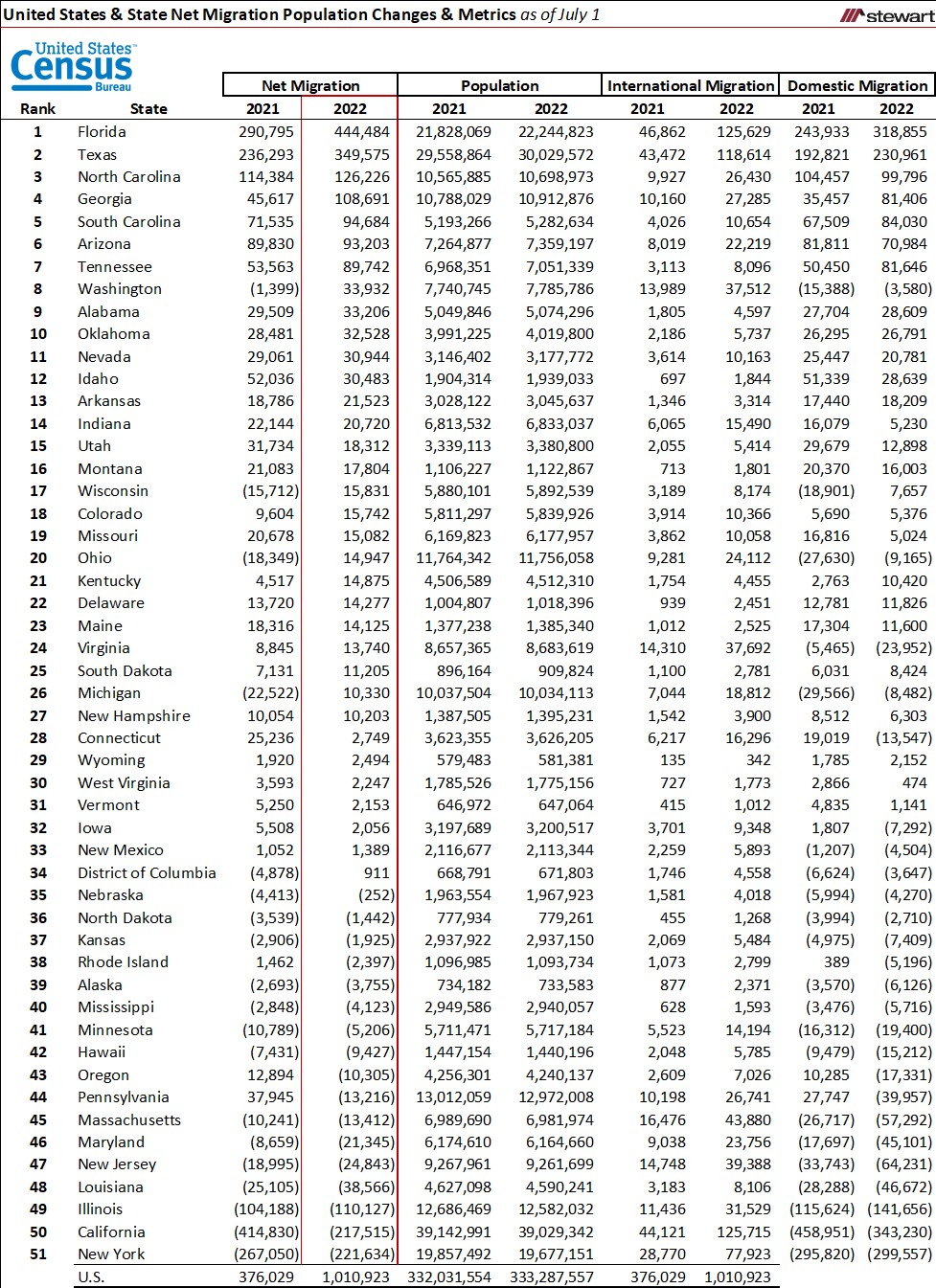 Individual rankings of international and domestics migration are detailed in the next table. Every state and the District of Columbia posted a positive net international migration growth in 2022. Domestic migration was positive for 26 states. 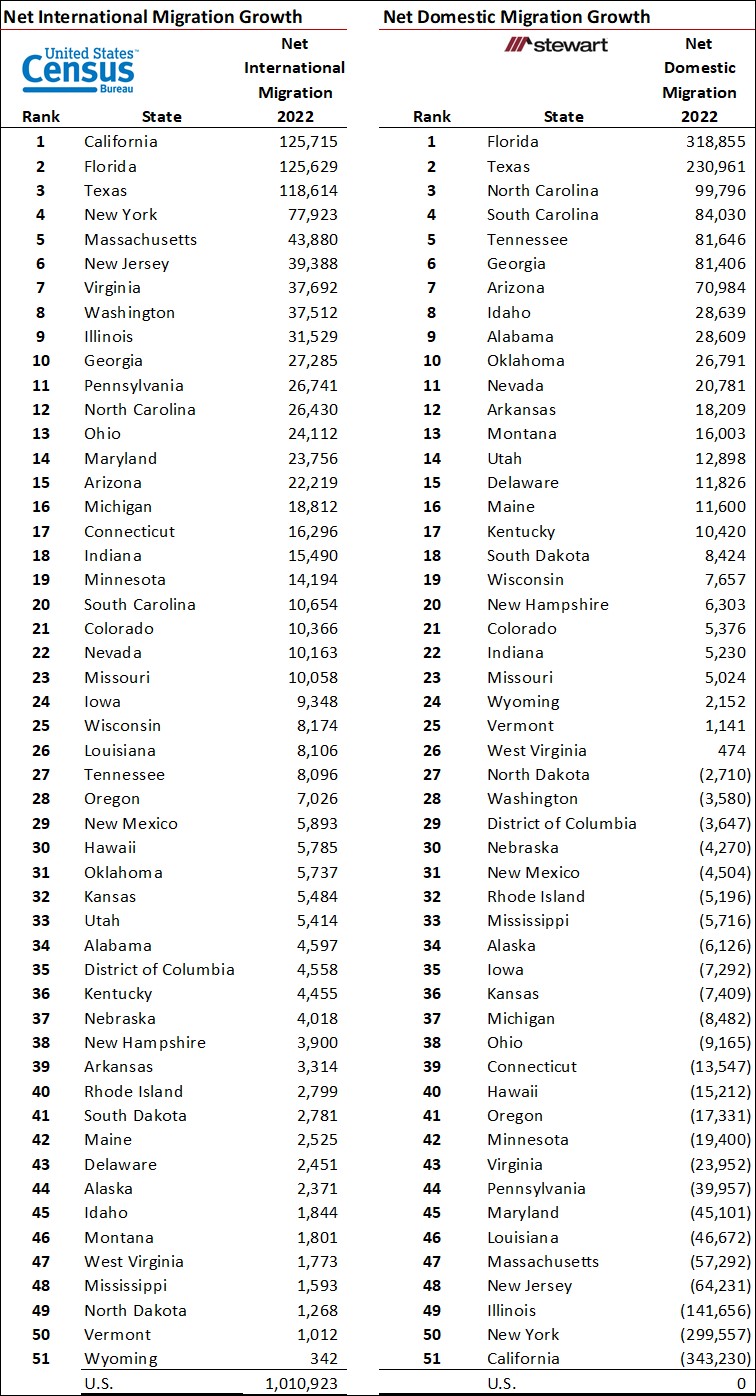 While population growth (or loss) does not automatically correlate to job changes, the last table shows the percent population change (and rank) from 2021 to 2022 and the same metrics for net job growth from February 2020 (the month prior to the pandemic) through November 2022. Population growth in 2022 and the job growth from pre-pandemic to November are highly correlated and statistically significant.

For those into statistics, the Pearson Product Moment Correlation Coefficient is 0.76555 and the Spearman Rank Correlation Coefficient 0.71846 with each having a P-Value of less than 0.00001. In plain speak this means that for most states, those with population gains also had strong job growth while population declines went along with weak job gains or literal losses. There were outliers to these statements, however. Delaware, for example, with a population growth rate of 1.4 percent (7th best overall) and the 39th worst (-1.4%) job performance from pre-pandemic (February 2020) through November 2022. Other anomalies included The District of Columbia (21st best population growth and ranked 49th best in jobs) and Oregon with the 17th best job gains and 46th best population change. 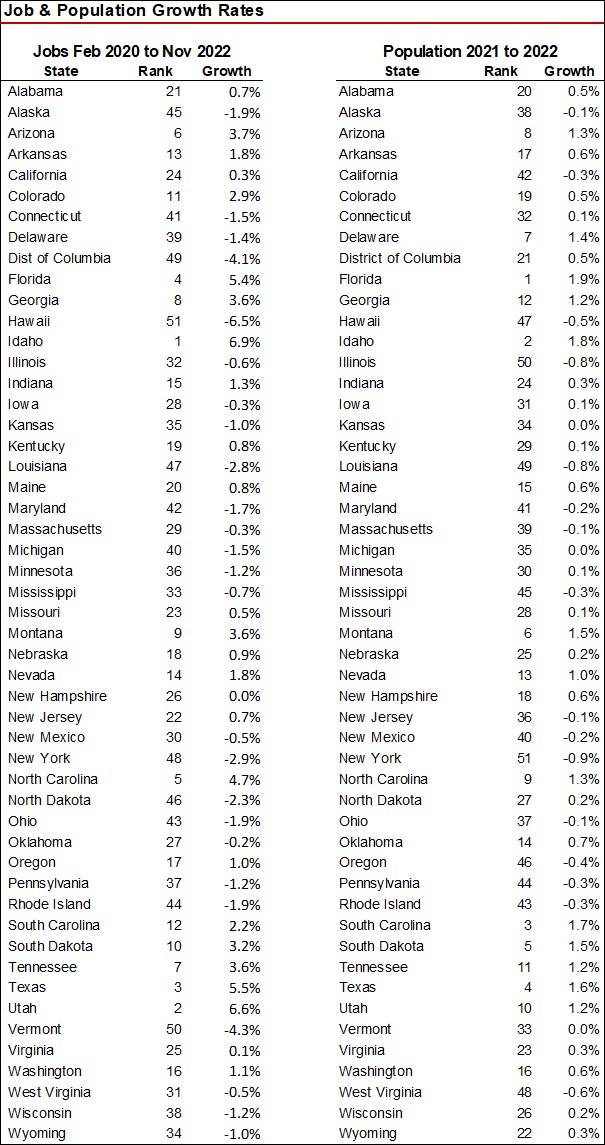 There always have been winners and losers on demographic and economic factors, but the pandemic accelerated these changes across the country. Change is inevitable, but the rate and direction varies across the economic landscape at any point in time.