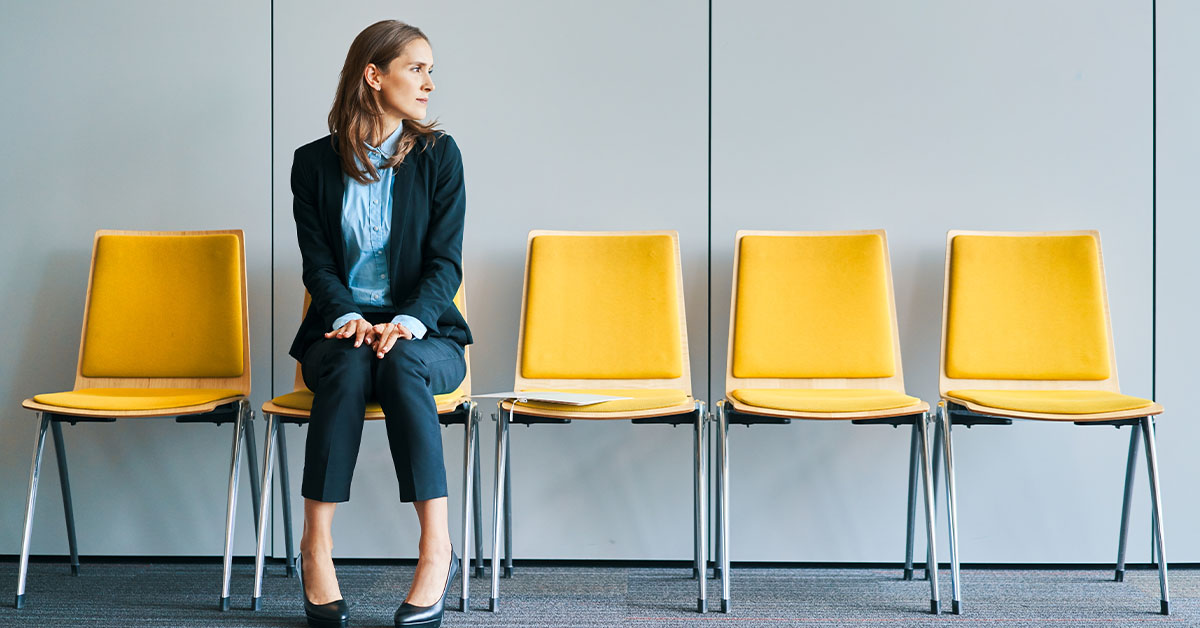 Job growth sputtered again in December with just 199,000 new jobs (once again around one-half the number expected by economists)  as reported by the U.S. Bureau of Labor Statistics (BLS). Economists polled by Reuters had a 400,000 net-new-job consensus while Dow Jones surveyed economists estimated 422,000 new jobs. Goldman Sachs had forecast 500,000 new jobs. ADT this week had estimated that the private sector added 807,000 net-new-jobs in December.

The unemployment rate, however, did continue shrinking contracting from 4.2 percent in November 2021 to 3.9 percent in December and was down from 6.7 percent one year ago. The Federal Reserve considered an unemployment rate from 5.0 percent to 5.5 percent as the tipping point defining full-employment prior to the pandemic. The following table shows monthly change in jobs and the corresponding unemployment rate monthly since January 2020. 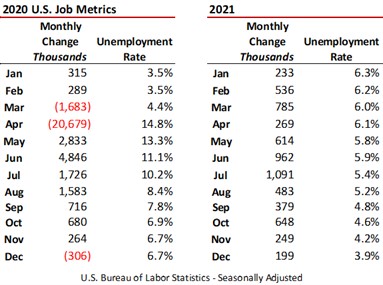 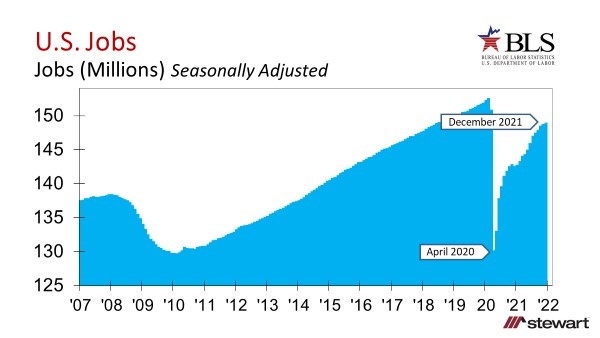 Not all job Sectors were impacted equally by the pandemic nor are they recovering similarly.  Monthly job gains as of December 2021 for each of the SuperSectors (as defined by the BLS) are shown in the next table. Also included is the percentage change from the prior month, year-over-year, and prior to the pandemic – February 2020. The hardest hit Sector is no surprise: Leisure & Hospitality, still down 7.2 percent since February 2020 (the month prior to the pandemic). The next most impacted Sector is Mining & Logging (which includes Oil & Gas exploration and production). This helps explain the surge in energy prices as the Sector was impacted even prior to the pandemic by systemic underinvestment given the bias towards renewables. The Financial Activities segment remains the only SuperSector with more jobs in December than anytime in history though both Professional & Business Services and Trade-Transportation-Utilities are close to recovery, down 0.2 percent and 0.3 percent, respectively. 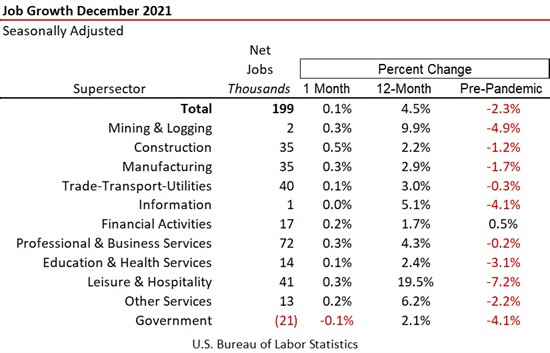 Employment data are further detailed in the next two tables. The first breaks out the number of jobs by thousands and the second comparative percentages. 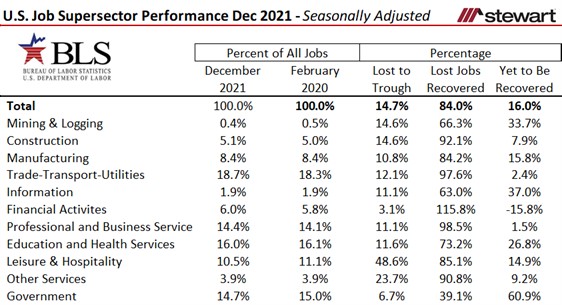 Hourly wage rates were up across all Super Sectors on a year-over-year basis as shown in the next table. The greatest gain for both 12- and 24-month periods continues to be Leisure & Hospitality, up 14.1 percent and 16.6 percent, respectively. Despite the gains, the Sector still remains the lowest paying of all. 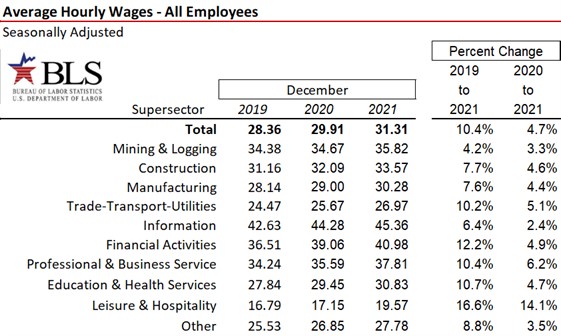 Unemployment rates are detailed for Educational Attainment and Demographic Cohorts in the next table. Those with a Bachelor’s Degree had a miniscule unemployment rate of 2.1 percent compared to 5.2 percent among the group not attaining a High School Diploma. Unemployment rates, however, increased from the prior month in the Black Cohort from 6.5 percent in November to 7.1 percent as of December. 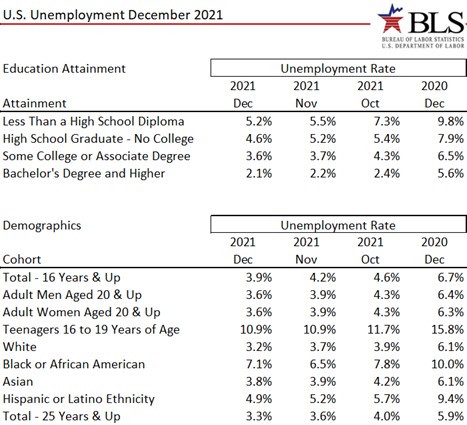 Unemployment rates across Occupations and by Industry & Worker Class are detailed in the next two tables. These data are only reported on an unadjusted basis (not-seasonally adjusted) so can only be compared year-over-year on an apples-to-apples basis. 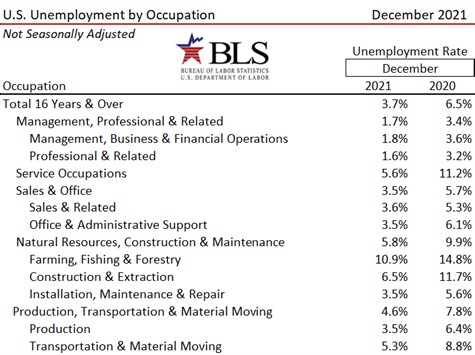 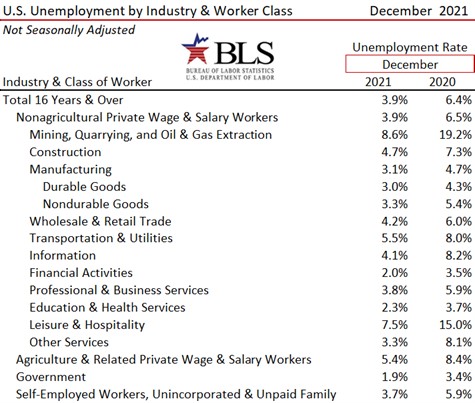 The hardest-hit Super Sector -- from the number of jobs perspective -- remains Leisure and Hospitality. After losing one-half of all jobs in March and April 2020, the Sector has come back as in the graph. Many believe total recovery in this Sector is still years in the future, as shown in the current Omicron variant outbreak today. 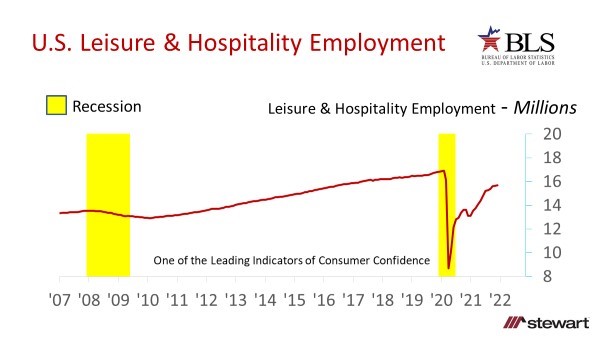 The Manufacturing Sector is gaining jobs, but also at a slowing rate. Just 35,000 Manufacturing jobs were added in the Sector in November and 26,000 in December. 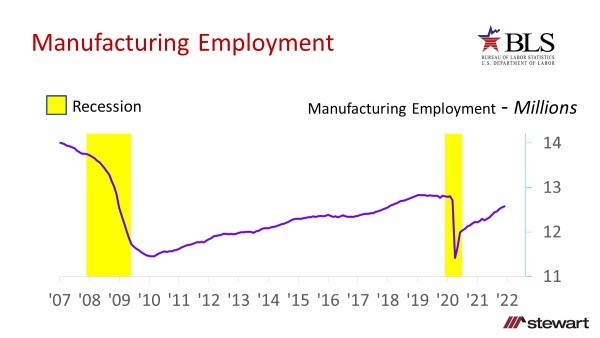 Jobs are everything to the economy. Period. The speed of the economic recovery slowed in November and December 2021, but at least the trend remained positive. The big concern are interest rate increases by the Federal Reserve to help slow inflation which may commence as early as March this year. This would negatively impact jobs even more.